Mobile app analytics company Flurry is measuring how many users of iOS 14.5 are opting in to allow apps to request to track them – and so far only 15 per cent worldwide have done so.

iOS 14.5 was released on April 26 and is gradually rolling out to users with compatible iOS devices. One of its new features is enforcement of what Apple calls AppTrackingTransparency, which means that apps must request permission from the user before tracking them or accessing the Apple device identifier (IDFA). 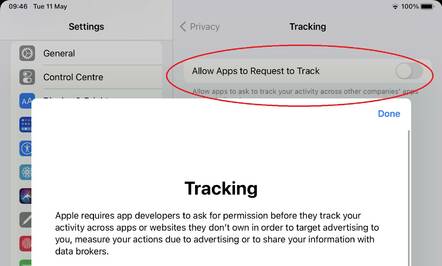 Apple’s Allow Apps to Request to Track is off by default, with a detailed description available

The company does make exceptions for fraud detection, credit assessment, and cases where the linking happens “solely on the user’s device.” Even when users allow apps to request tracking, the permission is still per-app and can be declined.

Single sign-ons and other methods

Apple has pre-empted several possible workarounds. App vendors are not permitted to incentivise allowing tracking, or to reduce functionality for users who do not agree. Nor are apps allowed to use alternatives to the IDFA such as email addresses or phone numbers, as tracking identifiers. Permission given in other places, such as on the vendor’s website, may not be applied automatically to allow tracking.

If single sign-on is used, such as log on with Facebook or Google, and that enables tracking, then the permission prompt is still required. The policy is in part technically enforced, and in part a matter of trusting the developer, though Apple will not approve apps which are discovered not to conform.

Flurry Analytics said that its analytics library is used in over 1 million mobile applications and provides “aggregated insights” across 2 billion mobile devices per month (not all of them iOS).

Rate of opt-in increasing over time

Flurry has also looked at how many iOS 14.5 devices have the “Allow apps to Request to Track” not only off, but also disabled, which can be done for organisation-managed devices via mobile device management. This amounts to about 5 per cent of iOS 14.5 devices worldwide, and 3 per cent in the US. 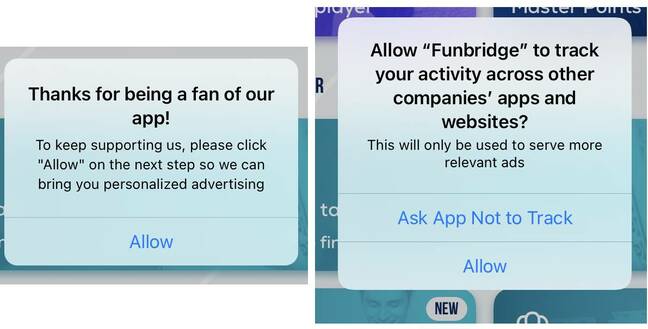 An app requests to be allowed to track, after pleading for an “Allow”

Flurry said that “this change is expected to create challenges for personalized advertising and attribution, impacting the $189bn mobile advertising industry worldwide.”

The company has said that “when the IDFA becomes largely unavailable, advertisers will have fewer tools for targeting and attribution. As a result, ad spending will likely drop, leading to lower CPMs and fill [rates] for application publishers.” According to senior director of product management David Lundell, “Apps that are ad-supported, or employ a hybrid model, may shift to paid models.” The figures tend to bear out his assertion back in July that “for all intents and purposes, publishers should consider the IDFA mostly unusable.”

An obvious question is whether the Flurry analytics themselves are subject to the restrictions. Flurry said they are not and that “your analytics from Flurry won’t be impacted by whether you display the prompt for opt-in authorization.”

Flurry said this is because it uses the IDFV (Identifier for vendors) and not the IDFA. The IDFV is different for each vendor and device, so it does not allow linking of data with that from other vendor’s apps. Therefore, “Flurry provides analytics reporting on all of your users regardless of opt-in state.”

Flurry does require developers using its library to announce that their apps collect data in the app privacy labels now also required by Apple.

The continued availability of first-party analytics does mean that large publishers can build up their own first-party data to customize advertising and pitch audiences to advertisers.

Apple also offers its own SKAdNetwork which lets advertisers measure the success of a campaign across multiple ad networks, but without access to user or device-specific data.®