A drug dealer’s ham-handed OPSEC allowed British police to identify him from a picture of him holding a block of cheese, which led to his arrest, guilty plea, and a sentence of 13 years and six months in prison.

Liverpool resident Carl Stewart, 39, who went by the name “Toffeeforce” on now-defunct message service EncroChat, was sent down at Liverpool Crown Court after pleading guilty to charges of conspiring to supply cocaine, heroin, MDMA, and ketamine, and of transferring criminal property. Merseyside police claimed they were able to identify Stewart from his palm and fingerprints, which were visible in a snap of Stilton he shared via EncroChat. That linked him to Toffeeforce’s drug deals in the chat app, the cops said.

EncroChat was founded in 2016 as an encrypted instant-messaging service and was said to have been favored by criminals as a communication tool until 2020. That’s when the UK National Crime Agency, in conjunction with authorities in Europe, infiltrated the platform and shut it down, seizing lots of useful information. The service was said to have 60,000 users worldwide at the time, with 10,000 in the UK.

“Carl Stewart was involved in supplying large amounts of class A and B drugs, but was caught out by his love of Stilton cheese, after sharing a picture of a block of it in his hand through EncroChat,” said Detective Inspector Lee Wilkinson in a statement at the end of last week. “His palm and fingerprints were analyzed from this picture and it was established they belonged to Stewart.”

Wilkinson said the EncroChat takedown, known as Operation Venetic, has led Merseyside Police to arrest more than 60 people, many of whom face charges for drug trafficking or firearms offenses. 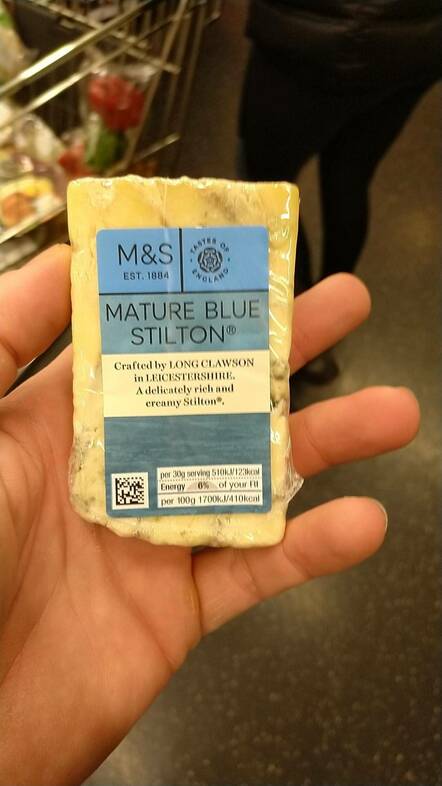 The photo of the cheese that led to Carl Stewart’s conviction … Source: Merseyside Police

The incident invites comparison with the 2014 reproduction of the fingerprints of then German Defense Minister Ursula von der Leyen from a photograph of her hand by biometrics expert Jan Krisller’s (a.k.a. Starbug). Fingerprints depicted in images also played a role in the 2015 conviction of a Florida man for sex crimes with a toddler.

Other identifying marks like tattoos have also been used in this manner. Following the recent arrest and extradition of Ndrangheta fugitive Marc Feren Claude Biart in the Dominican Republic, authorities said they spotted Biart’s tattoos in a YouTube video and were able to identify him even though his face was not shown. And last year, US federal authorities charged a Philadelphia, PA woman with arson that occurred during a protest over the death of George Floyd after they identified her from details captured in images and videos, including a distinctive shirt and a tattoo on her arm. ®